So the internet is ablaze with talk of the Fifty Shades of Grey trailer. Yes, the long-awaited (not by me) celluloid version of the girlporn publishing phenomenon is almost here. And I’m already sick of seeing women sharing the trailer on my social timelines. Why? Because the whole thing, not to put too fine a point on it, is a crock of shit. 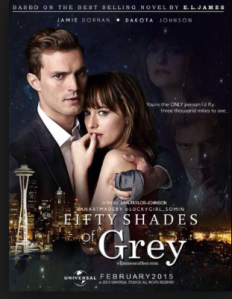 When the book first hit the shelves and the world and its (sex –starved) wife was banging on about it, I tried to get into it. Nobody wants to be shunned from the zeitgeist house party, right? I wanted to know what all the fuss was about.

I bought it, read the first few chapters, and closed it in quiet horror.

Take away the fact that it’s terribly written, with dialogue less believable than one of my seven-year-old son’s comic strip creations. After all, it wouldn’t be the first and last book to claim that dubious honour. I could see past that.

What I object to most is the plot. Shy, virginal Anastasia agrees to enter the brooding, chiseled Christian Grey’s dark world of S&M (and become resident in his ‘Red Room of Pain’ – not a euphemism) in return for an iPad and a ride in his helicopter (again, not a….).

So why do I object to this?

What is worrying is that I know a lot of teenage girls read this book, and what sort of template for sexual politics is this giving them? At the time when the book was ubiquitous, every time I saw a woman proudly devouring it on public transport, I had an overwhelming urge to wrench it our of their hands and replace it with a copy of The Memoirs of Catherine M. Anything but that TAT. Social etiquette prevented me of course.

If the film is anywhere near as clumsily ‘crafted’ as the trilogy of books (and let’s face it, even in 3D, there’s not much you could do with those two dimensional characters) then here’s hoping it bombs.

If I had my way I’d go round doctoring all the film posters, armed with some Tipp-Ex and a marker pen.

Fifty Shades of NO WAY has a certain ring about it, no?