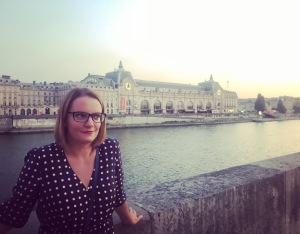 “You must REALLY love Paris to keep coming here alone”. So says Pierre (what else would he be called?), sat next to me on the Cardiff – Charles De Gaulle flight this morning.

Oh Pierre, I think. If only you knew….

I don’t quite have the words to explain, so I just smile and say “Yes, I guess I really do”.

He, like many Parisians, looks surprised that I’m travelling solo. The flight is full of cooing couples, fizzing with excitement (one girl in the row in front reeks of “IS HE GOING TO PUT A RING ON IT?”. Why else gets a blow dry for a FLIGHT? Trust me, you can just tell).

I mean Paris is, after all, the city of romance. Apparently.

Yet, for me, it’s the place to come when I want to romance myself (not a euphemism). It’s the place I escape to, where I can breathe, and be enchanted at every turn of a street corner.

The truth is, I’m just not that good at sharing it. Once, I brought a Boy, and spent the entire time wishing I had the city to myself. It’s just more romantic alone, I’ve realised.

So here I sit, on the Rue Vieille Du Temple in the Marais, the very cool Jewish district, and one of the oldest neighbourhoods in the city. It’s the closest you get to the feel of medieval Paris, and has more pre-revolutionary buildings and streets left intact than any other. It’s teeming with Jewish delis, falafel stands, designer and vintage boutiques, hidden cafes backing onto secret gardens and cool cars. My apartment is about the size of an American fridge, or a box of cooking matches if I’m being more honest, up four flights of winding stairs and absolutely roasting in 26 degrees heat. Obviously, I BLOODY LOVE it.

If I lived here, I’d have written the novel by now, I kid myself. In reality, I’d probably be too busy moaning about the metro and strikes like all other Parisians.

I sit outside a street corner café, glass of Bordeaux and pack of 20 (soon to be 10; sorry nan) on the table, watching a humid city afternoon unfold in front of my eyes. The cool kids in Breton tops (it’s a cliché for a reason) pushing their bicycles past, the shiny-haired students in hot pants clutching their designer sale bargains, lithe-limbed women in immaculately tailored shorts and Chanel cross-bodies licking ice cream cones. Jesus, Paris. DO YOU HAVE TO BE SO GODDAM SEXY?

The funny thing is, the first time I came here I hated it. I’ve heard lots of people say the same. To them, I say: give it a chance. For me it’s like olives, houmous and jazz; a grower.

Since then, I’ve stayed in different places around the city, eager to get to know the different arrondissements, which all have their own unique feel. The chocolate box Montmartre of Amelie and Midnight In Paris, the chi-chi 16th where the professionals own smart apartments, the bohemian St Germain (chosen on the strength of the Peter Sarstedt song ‘Where do you go to my lovely’), and now the magical Marais. I’ve brought my son, my mother, and a Boy, and I’ve visited alone plenty of times. It’s been a different experience every time.

Some of my most magical memories have been made here. The first time I came, on a coach with my then six-year-old, he pointed at EVERY electricity pylon lining the route asking “Is THAT one the Eiffel Tower mum?” (it never got boring).

Amongst the other abundant brilliance that’s happened to me here:

But my favourite Paris memory of all? Watching an entire city party like it was 199, er, 8 (the last time France won the World Cup) after the national team beat Croatia 4-2. I’ve never seen so much champagne being sprayed (the ultimate cinematic metaphor for a happy climax?), so many people hanging out of flag-draped beeping cars, or so many happy faces. It felt like being part of a small piece of history.

In the bar where I watched the match, I spotted one of the barmen and a woman I could wrongly be assuming to be his girlfriend girl sneak off into a broom cupboard at the final whistle. They emerged ten minutes later all disheveled and smirking. PARISIANS EH?

After the match I ended up in the bar underneath my apartment where a DJ played Daft Punk, Prince and Chic until the early hours. It was the party to end all parties, with hundreds of people on the street outside drinking wine from plastic cups and carousing. They were very much up all night for good fun, and I wondered how many would get lucky.

Remarkably, the following morning, the city streets were immaculate. It was as if I’d dreamed it all. Quel beau rêve !

If anyone tells me that they don’t like Paris, I immediately sense we may not be kindred spirits. It may feel arbitrary, but that’s the way it is, for me. It’s important to have criteria, non?

If you can’t feel the magic, it’s not meant for you.

There’s no city that makes me feel so unpolished, so unable to accessorise, and so plain.

Yet I love it anyway.

For the gallic shrugs, the way waiters don’t care (they don’t work for tips here, so it’s the opposite of the American “Y’all have a nice day now” falseness), the way you can be anonymous and sit at cafés all day without being bothered (try that in Rome, and bonne chancewith that).

It all adds up to something quite hypnotic for me.

If I need an injection of creativity, of inspiration, of a taste of life beyond a country fast going to hell in a handcart, it’s my first port of call.

If I have a problem, Paris is usually the answer.

It doesn’t really matter what the question is, even.